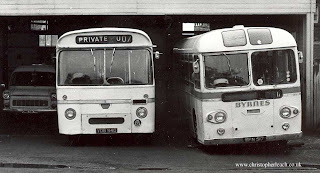 Jim Berresford and his bus operations of Berresford Motors and later Stonier are almost legendary but as well there was another small unit close to Cheddleton at Leek called Byrnes. Three members of that fleet can be seen at the depot a petrol-engined Ford Transit plus two AEC Reliance semi-coaches, one bodied by Willowbrook VDB940 and the other WFN517 by Park Royal which started life with North Western and East Kent respectively in 1963 and 1961.
Posted by christopher at 15:02