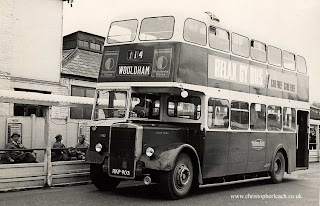 Until the late Sixties Southdown, Maidstone and District's nextdoor neighbour was a bit of an exception having a fleet of not just interesting buses but of a proudly turned out high specification too. Although M&D had a lot of the more unusual and good quality to enjoy it had it's fair share of the cheap and cheerful including these 'rattle-box' lightweight MCW bodied Leyland PD2/12 buses of 1954. Indeed many of the earlier much loved thirty-six rugged Leyland Farrington bodied examples of 1951 outlived them some still looking smart and running till 1970. However unlike some DH422 RKP903 lasted long enough at Maidstone to receive it's new computerised fleet-number that was introduced in Autumn 1967.
Posted by christopher at 08:20