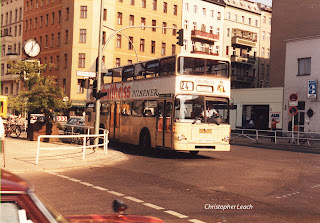 Today it's like any other city but here is an atmospheric 1982 view of Berlin bathed in golden sunlight after a hot baked day. Much has changed in former quiet backwaters lurking in the shadows of the nearby Berlin  Wall as a whistling MAN of 1976 2853 threads it's way to Moabit. My Brother in Berlin turns his nose up at me for drinking the 'working class' Schultheiss Beer but why sup Becks when I get it by the case at sainsburys? Rather like the Ikarus buses found in East Berlin these vehicles had a pleasant modern front profile which distracted from it's overall functional box-like appearance. Indeed they were somewhat looked down us as being dull for they had none of the character of the wonderful shapely almost eccentric Bussings they replaced or the crisp confident lines and powerful feel of the next generation starting at 3500. Still I miss them too as they also sounded evocatively pleasant especially the earlier ones like this bus.
Posted by christopher at 02:31