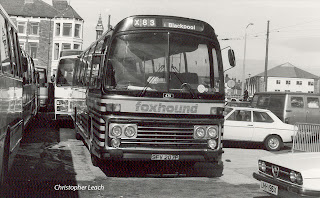 Once on busy Summer Weekends one could find a colourful collection of NBC and SBG coaches at the the old Ribble Colleseum Coach Station. This image illustrates what I liked about Blackpool in those days where everything was shoe-horned in like some glorious muddle including cars and vans. Today though everything seems much more tidy and clinical and a bit empty of visual excitement, more a satisfying day out for traffic wardens than the seaside kid inside us all. Foxhound was the coach branding of Midland Fox from Leicester but this Plaxton bodied Leyland Leopard No.475 SFV207P had come home as it's original owner National Travel West had been largely based on the former Standerwick's operations here in Blackpool. If one tries to be logical some of these names are a bit silly as why would a bus company that calls it's buses 'Fox and Fox Cub' want 'Foxhounds' and huntsmen blowing buggles on horseback as they are obviously the enemy. However probably it never occured to the planners who most likely thought of rural Leicestershire with it's well known Hunts.
Posted by christopher at 04:04