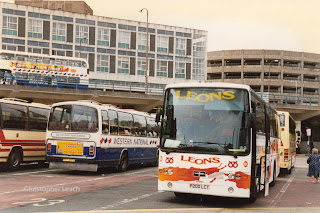 I suppose most of us even if we ignore local coaches when we are at home notice them a lot more further afield, perhaps they then seem more interesting too I'm glad I took this one though at Bretonside as the registration number of Leons of Stafford Van-Hool bodied Volvo P200LCT ended up on a Ford Transit minibus which was later sold to Top Travel just down the road where I worked and which I drove many times including on a long hot trip to Cornwall encountering plenty of traffic over Bodmin Moor.
Posted by christopher at 04:33