Plymouth:I've got the Blues I rather miss Wallace Arnold 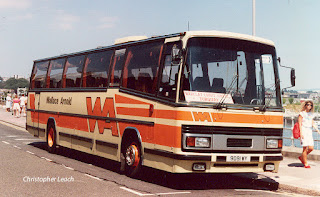 I thought it didn't seem right that when under common ownership an industry stalwart like Wallace Arnold should be absorbed into what was by comparison a bit of an 'upstart'. No doubt the former Leeds family firm was perceived to be rather old-fashioned, still I think the elderly people who go on extended breaks rather prefer something  traditional that they've always known to the rather brash 'internet age' slightly overbearing purple blue of Shearings. Volvo-Plaxton 9091 WY was one of a number of coaches registered in the Nineties.
Posted by christopher at 02:23