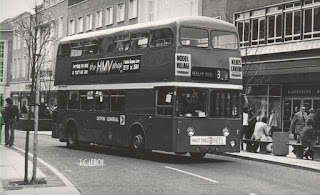 Formerly DH 567 and later 5567 with Maidstone and District this was one of a number of MCW bodied Leyland Atlanteans transferred to Western National and also Devon General who also had them but it was only after two new G-Reg buses arrived that they first operated in Exeter for 30ft deckers had been banned no doubt because of an operating agreement with the Corportation.
Posted by christopher at 06:59