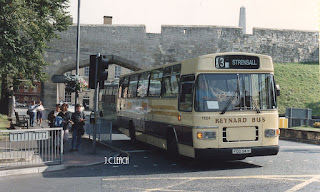 Still in Reynard's livery was this Bedford with quite rare Plaxton Bustler bodywork seen in York but now as can be judged by the high fleet number part of the former West Yorks PTE which had extended itself beyond the former industrial municipal operations heartland of West Yorkshire when it took over York from the former BTC and later NBC West Yorkshire.
Posted by christopher at 15:18