The Mauritania Sails Along the M3 for Shamrock & Rambler 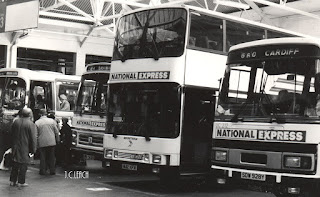 The three axle MCW Metroliner  was quite an impressive beast which was used by a number of NBC operators who needed the extra capacity of a double-deck coach. They struggled a bit on the hills so I think the medium distance National Express routes were more suitable as they were less likely to fall behind on these. Shamrock and Rambler distinguished itself by giving it's fleet of coaches names and appropriately for these 'liners' this one was named after Mauritania in keeping with Southampton's shipping heritage where it was based.
Posted by christopher at 16:18