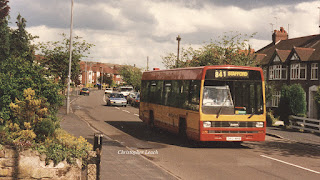 Midland Red North at Stafford had a number of interesting Leyland vehicles including Leopards and Tigers with a variety of bodywork. Not to be forgotten were also some unique Alexander N bodied Lynxs which had been tried by Citybus of Belfast which ran from here and as well as some conventional examples but these included yet another trial bus as 1016 was bought by Kelvin Central on behalf of the Scottish Bus Group. As no orders followed I think it remained the only Lynx to operate with them till it's sale in 1991. They had their faults but lack of speed wasn't one of them hence the distortion on this shot of D401 MHS as  hurries down the Tixall Road toward Stafford from the Heywoods.
Posted by christopher at 16:47