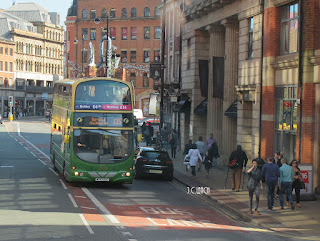 The bus scene around Manchester has been enhanced by a number of buses turned out by the First Group in colours from the past. These angular Wright bodies seem to carry them rather well especially compared to when it has been done to the Alexander 400 series of buses. Instead of just plonking on standard fleet numbers this Bury based bus looks very attractive as it includes the right gold numerals too.
Posted by christopher at 14:55

Wonder what happened to the driver of the black Clio - parked on double yellows in a bus lane!

It was a Sunday so he probably had a bit more time before being nabbed by the police I expect.