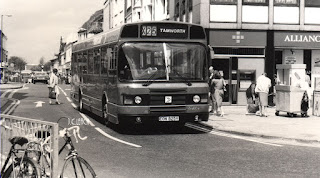 Carrying Tamworth's Mercian branding was this Leyland National2 which alongside 823-4 were kept at the Lichfield outstation and also worked the X25. A number of these were also allocated to this the Stafford end of the route as a low bridge under the railway at Colwich precluded more normal Nationals with that pod on the roof but several had it removed with that in mind.
Posted by christopher at 03:03

To be pedantic the X25 omitted Colwich, the latter being served by 822/823/824/825 routes. The two low railway bridges - 10'3" and 10'0" are in Little Haywood rather than Colwich: the bridge in Colwich can be negotiated by all single deck vehicles.

Thank you for your continued excellent blog.