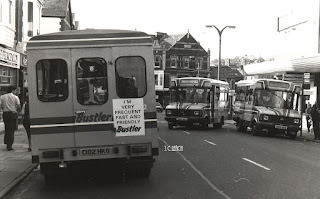 National Welsh launched it's 'cheap and cheerful' Bustler minibus operation in Barry, one of many around the country at the time in about 1985. Coincidentally No.2, 4, and 6 meet with another one in front of C102 HKG. I think they chose Bustler because it contains the word bus but they certainly caused a bit of hustle and bustle in the crowded streets as they gathered in packs like this.
Posted by christopher at 16:32

By breadvan to Presto...

Not exactly a title for an award-winning travelogue, but definitely two things no longer to be seen on the High Street!

Well I'm glad I remembered to take the boring things as they are not quite so boring though still a bit dull.

I'm glad you did, too. There are 20-zillion three-quarter views of buses out there, but whilst they're great as formal records they say nothing about the society in which those buses ran.
Shots like yours make great social history and to me are much more valuable than the pure record shots.

And they bring back memories, which is always good. :)