Arriva Volvo Double-Decker in Penkridge on the 75 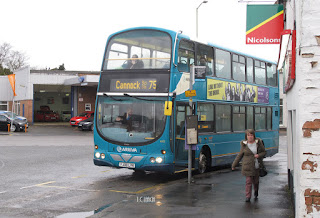 Just as I was getting used to double-deckers on the Cannock to Stafford Hospital 74 and 75 Services they replaced them with the same combination but single-deck Wright bodied Volvos. It's a bit hard to fathom but it was actually two years ago when I took this shot in Penkridge as I was there to pick up my new car from the garage in the background. But even the Ford agent Hodson's has gone now as it has relocated on the edge of the village, more space perhaps but I'm sure they miss out of some passing trade.
Posted by christopher at 16:08