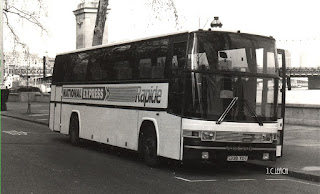 In the Eighties National Express tried to impose what they called the 'Expressliner' a Volvo B10M with Plaxton bodywork on to it's contractors. Thankfully not all did and the idea was dropped so we could still find a bit of variety at least. Amongst the more exotics was a Volvo B10M with imported Jonckheere bodywork. Some designs one goes off but with the passage of time I've grown quite fond of them and they had a good reputation for quality too. A nice touch is the way the National Express stripes on the bodywork seem to mirrors the slats of the front grill. I'm not sure who owned it, but S.U.T had some of this batch at least. A338 YDT was killing time on the London Embankment.
Posted by christopher at 05:57

Bus Lists on the Web has this owned by National Travel East.

Like Yelloways these got bought out by dealer turned operator SUT. Mick obviously you are correct but of course National Travel North East was based around the old Sheffield United Tours of which this rather despised new SUT took the names. It was no respecter of their former pride and was to put it kindly a cheap and cheerful budget outfit that stripped out the good coaches and replaced them with knackered Neoplans etc.