Crosville Trainer 616 LFM Must be Tea-Break 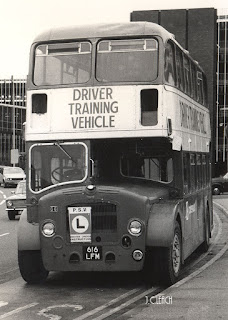 I missed the half-cab buses when those outside London quickly disappeared from the streets. But a few hung on as driver trainers like this Crosville Lodekka standing outside Warrington Bus Station whilst they all had a cuppa I expect. After all they all have to learn how to drink tea and read the paper so that they never have to commit that sin of leaving on time lol. Many of these trainers moved around the country but this was once DLG 6 not to be mistaken for DLB 967 which was 616 HFM.
Posted by christopher at 03:38