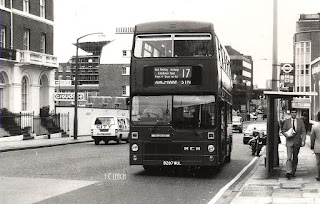 I am probably over simplifying it here but generally one found more of London Buses Leyland Titans in the South and East whilst like this example, there were more Metrobuses in the North and West. In the long gone Sixties one had a good idea how far out from the centre of London one had reached as firstly the RTW's dwindled away, then the RTL's leaving just red RT's and RF's and of course pockets of Routemaster routes as the trolleybuses they replaced came a good way out too.
Posted by christopher at 02:56