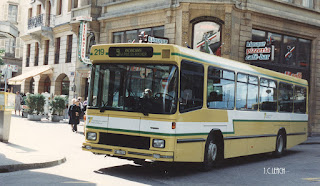 In the late-Seventies Swiss towns and cities had to abandon their traditional colours for a corporate orange livery but thankfully the idea was dropped and most returned to their old colours or took the opportunity to change it to something new. Apart from the addition of the white relief these were the traditional hues at Neuchatel but applied in a modern way as seen on this still new Volvo in the Nineties.
Posted by christopher at 16:08