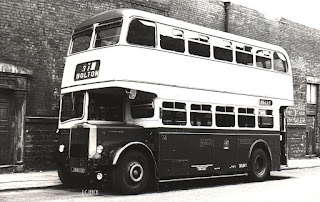 In the Sixties at Bolton Ralph Bennett and East-Lancs Coachbuilders together introduced a new look for the municipal bus with it's squared-up by striking Atlanteans. It also brought about a livery change which looked alright at Bolton as it was neatly applied but I still think older more traditional buses looked better as they were and I rather liked the way Southampton mixed the old with the new. This might look like a regular Leyland Titan PD2/13 but it carried bodywork by Bond/Ashcroft.
Posted by christopher at 00:54