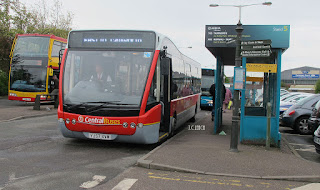 A bit like the old days when many nearby towns had corporation buses, a short journey can result in completely unfamiliar buses. For me Lichfield is the next town but there are a number of buses I wouldn't see in Stafford including this Versa of Central Buses and I think The Midland Classic on the Birmingham to Burton route was also an Optare. It is nice to see there are still a few route numbers still surviving from Midland Red days as here we could also see buses on other old BMMO trunk routes in May 2017 like the  825 and 765 which once made a marathon journey to Coventry but alas now only goes as far as Tamworth..
Posted by christopher at 03:20