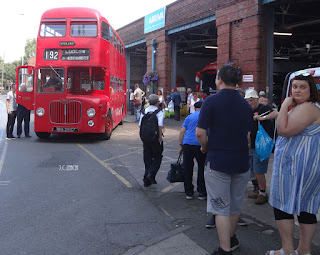 Well the bus rally season has started again and no doubt I will go to a few events that interest me. One of the best last year was an Open Day held by Arriva at the old Midland Red garage at Tamworth. Amongst the buses  giving rides was this D9 which was preserved as it was thought at the time to be the last one built entirely by BMMO at Carlyle Works. But I was sad to read that it's owners at Wythall have decided to repaint it out o this it's original Midland Red red into bland NBC poppy-red. No doubt this is how many younger enthusiasts remember it instead but for me in the Seventies everything went downhill and as I read somewhere some wag quipped that NBC meant 'No Body Cares' and that seemed to sum up the nationalised and PTE run bus industry.
Posted by christopher at 04:12

Totally agree with your comments Christopher. "No Body Cares" was certain the attitude the public saw. That 1970s era of bland liveries, the demise of municipal pride, the disastrous Local Government Reorganisation, British Leyland, the list is endless. I understand times move on but I'm not ashamed of sounding like a "Grumpy Old Man."

Thank you Mick, it has been some time since anyone left me a comment.