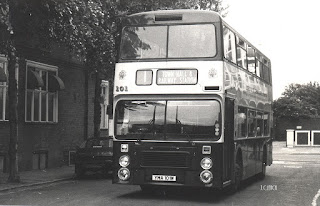 I have always been a fan of small Municipals and Chester was one of the most pleasing with it's tradition graphics and that chocolate-brown and cream livery which seemed so well suited the city streets. For many year Guy double-deckers were the choice and once the Arab stopped being available it went on to the Daimler Fleetline and then as seen here the Dennis Dominator. One thing they all had in common was the Northern Counties bodywork contract which till they merged was shared with not too far away it's fellow Wigan bodybuilder Massey Bros.
Posted by christopher at 16:33