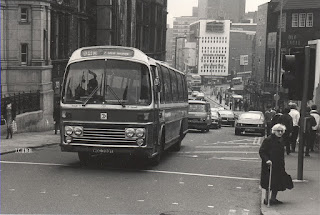 The 144 from Birmingham to Worcester and The Malverns was one of Midland Red's best known routes. But as pleasant as the towns and countryside like a many a long bus trip it was something of an endless slow plod  even upstairs on on a D9. But the Motorway Age gave it a spring in it's step as now services could speed along the new fast roads like the M5 and at least some of the letter x numbered routes started to live up to the idea of them being an express service. Indeed Midland Red even used some of it's fast 'London Motorway' BMMO CM6's on it but in later years it became the preserve of Leyland Leopards Dp's and later  proper service coaches like Plaxton Supreme 733 seen leaving a slightly murky Birmingham City Centre in the early Eighties.
Posted by christopher at 16:07

Climbing up Hill Street past the Post Office on its way out towards the Hagley Road, with a pick up to be made at Bearwood before joining the M5 at Quinton.

I didn't use the X43 very much as it meant trogging into the city to pick it up at the Bull Ring whereas the X44 followed the 144 route out of the city along the Bristol Road picking up at Selly Oak and Northfield, which was walking distance from my home. The only problem was that the timings meant that the first trip out of the city (and therefore the most useful for a day out) was an X43...

Midland Red's motorway express and limited stop routes died as British Rail got its act together in the early 1990s after years of half-hearted railway operation in the Midlands, and whilst I miss the whole Limited Stop network, I think the truth is that between the frequency and speed of trains and the sheer congestion on main roads, a network such as what became "Midland Express" would never be viable now.

The more I look at this picture, the more I see...
The WMPTE Ailsa at the bottom of Hill Street, the milk float in John Bright Street, the parked Princess, the BT van (I can never remember what they were called). Almost everything in that shot is now nothing but a memory.

Thanks for posting this one, Christopher. It really has taken me back!

Yes Ross, I think this was one of the best places in Birmingham to take photos and Tom Moore took some at this spot too. Yes it's a favourite of mine too and it's nice to know the X43 and X44 mean't something to you. I agree as with the old Green line network the congestion on the roads today would simply strangle it and I wonder sometimes how National Express manage to connect if they usually do. As for the BT van it was a Commer.

I agree 100%, Ross. Christopher's photographs almost always show us more than "just a bus." Only yesterday on a FB group someone bemoaned the fact that an old gentleman was walking into a photograph. To me, that added so much to the photograph. There's room for both sorts of photographs, but I always enjoy the composition of Christopher's.

The C16 type coaches were also used on the X92 and X93 and were totally unsuitable for stage carriage work but were bought via support from the Bus Grant. As a regular user of the 144 & 192 even today, it was far better when a Leyland National was used you could put your shopping somewhere and actually see where you were going due to catastrophic nature of what was a touring coach. I am not sure the HILL ST I work in today is the same as the one as commented on,the Post Office building remains on the left whilst the white M&B pub is still there at the bottom the only difference the building on the right is now a Wine Bar & home to the IoD I cannot see how the scene has changed much today for a NBC Leopard then now read a Megabus today.