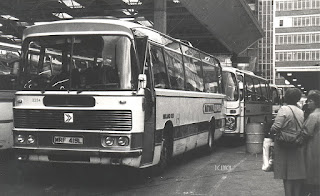 Midland Red was one of those NBC companies which could offer a bit of variety and this was helped further when vehicles taken over from Harper Brothers were added to the fleet. Midland Red had Dp Leopards and Plaxton coaches but from Heath Hayes came some Duples as well like 2254 at Victoria Coach Station.
Posted by christopher at 03:02

In my view a classic coach, Premier Albanian had duple bodies on their coaches when I drove for them many moons ago.

Absolutely horrid vile coach inherited by Midland Red not a patch on the C14 I well remember me and my mum going to London for the day from Digbeth on it after booking the ticket in the West Mall Booking Office mums back was killing her when we got to Victoria perfect return journey though a duplicate had to run and we came back on an S27 thrashed up the M1!

Everybody has their own thoughts on what is a classic coach. I prefered the first the 1968 (F-Reg) version to the later coaches and I still think the less-subtle fiddly Viceroy treatment belonged on the lightweights. However build quality was not wonderful on later Duple bodies so they lose points there.