At Last The Perfect Enviromental Bus 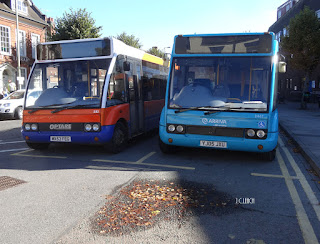 As you can see things are much better than they used to be for underneath parked buses we no longer find nasty patches of  thick black engine oil instead it's a gentle sprinkling of brown leaves a puddle clean enough for young children to play in. I was going to make a more serious point about how nice it was to see this at last as sometimes I could smell the diesel leaking from Arriva buses and used to tell the driver to make sure they reported it as it is so dangerous to two wheeled road users on a wet road. But alas it's not quite so good in reality as I see the buses are all park behind that yellow line keeping it hidden but having said that I feel it's a lot better than it was. Once Optare Solos were everywhere except Stafford but now the once ubiquitous older Plaxton Pointer bodied Dennis Darts have mostly gone they seem to have taken over a lot of the duties at D&G, Select and even Arriva have got in on the act.
Posted by christopher at 04:37