Bolton the Really Brand New and the No Longer So New 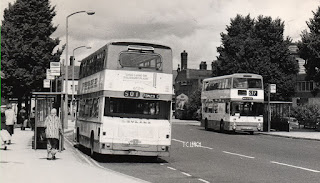 With the exception of Nottingham which continued to evolve it's own buses the other innovative municipals of the Sixties got taken over and absorbed into the PTE's. As well as the huge city fleets I'm thinking of smaller Sunderland and here at Bolton whose general manager Ralph Bennett was responsable for a completely new design studio commisioned modern corporation bus from East Lancs. Once these one time eyecatchers that had passed to Selnec and was look looking shabby and it could be argued that their scream of modernity fifteen years earlier had become more a look of 'Period' quirky but no doubt some of that same thinking and desire for clean lines went forward into the next generations of Manchester Buses like the Mancunian and the brand new  'Manchester Standard' Northern Counties bodied Leyland  Fleetline 8076 BVR-76T seen here probably out on it's first day out.
Posted by christopher at 16:42