P443 JOX Reminds you of something else? 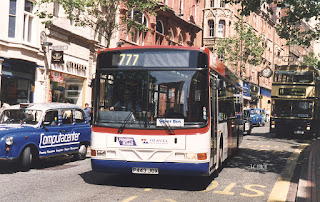 There are some buses we like and not for the most obvious reason. I liked these Volvos anyway but this batch made me think of Midland Red as this is P443 JOX whilst by coincidence Midland Red had both Nationals and Plaxton bodied Leopard coaches in the pervious registration scheme and the series which included JOX 444P. JOX 443P was another one but it never ran for Midland Red as it moved to another NBC operator South Wales along with 442 before entering service in the Midlands. Before anyone pulls me up, yes there were two Daimler Fleelines as well which had been ordered by Harpers JOX 439-440P.
Posted by christopher at 16:43

Yes these WMT buses always made me chuckle when on board but no orange seats! Even stranger Diamond Bus have some modern HA Registerations very Warley now Sandwell where they are based and very Midland Red