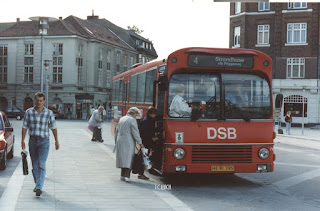 Kolding seemed to be a a very typical Danish town and when photographed in the Eighties this Aabenraa bodied Volvo was also very typical of the almost 600 strong DSB railways fleet which despite seeming quite widespread had buses based in about twelve locations. The bus here was on a town service which a few years earlier when I came in 1979 was still worked by fairly  elderly cream painted DAB-Leylands as the town still had it's own bus service. However despite DSB being almost totally Volvo the twenty-six buses allocated here included a few of the twenty DABs which made up the rest of the fleet.
Posted by christopher at 16:17