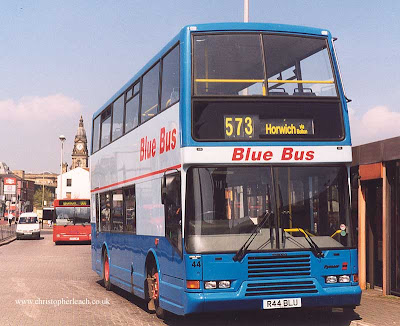 See the name Horwich and most will think it's a misspelling of Norwich, but it is a large old industrial red-brick suburb just outside Bolton and once famed for it's large Railway Works. Today it is much better known for Blue Bus one of a number of large Independents that grew and prospered after Deregulation. As well as new single-deckers it has also bought a few new double-deckers like this East-Lancs bodied Volvo captured soon after it entered service in the mid-Nineties.
Posted by christopher at 05:00