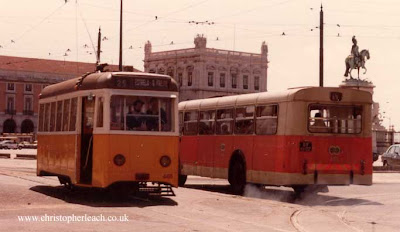 Lisbon Ttam No.465 is older than it looks as it was one of a batch of seventy-five Nos.400-474 ordered from the St Louis Tram Company in 1899 and delivered in 1900-1901. Many had been withdrawn by 1973 but others including this example had been rebuilt with modern fronts between 1952-1963. Leaving a cloud of smoke as it goes by another rebuilt vehicle, a rebodied half-cab AEC Regal heads in the opposite direction.
Posted by christopher at 01:15