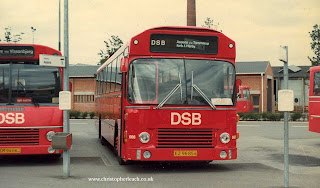 Some brand new buses stand out more than others and maybe it's because I'm getting older that I don't seem to notice them so much. On the other hand when they were all painted in strong primary colours they really gleamed like this recently entered in service dark red Volvo belonging to DSB, the Danish State Railways in 1982 which bore a nice fleetnumber too 666. Previously most of the fleet had been bodied by Aabenraa but as well as a few on Leyland DAB's the fleet also started to feature DAB bodies on it's customary Volvo's.
Posted by christopher at 06:51