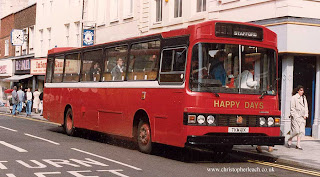 With Deregulation Happy Days Coaches of Woodseaves near Stafford reminded us of it's former days as G.H Austin when it started buying second-hand buses again. As before most were Leylands but a couple of rare sixty-one seat high-capacity  Wadham Stringer bodied Bedford YMT's appeared from Maidstone Borough Council including TKM 111X. To be truthful thses buses and usually shorther were not exactly rare as the British Forces and other none PSV users had them but they were ceratinly not common as a service bus.
Posted by christopher at 15:19