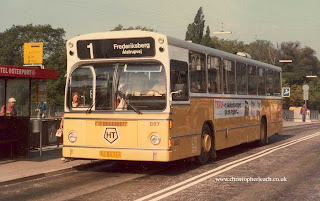 I must admit I tended to look down on this rather square Aabenraa bodied Volvo's in the Copenhagen fleet of HT as they lacked the character of the earlier well rounded Leyland-DAB BL1-2 Series buses that reminded me of Leyland Panthers bck home. The last of those DAB's was No.510 quickly followed by the first of these in 1970. However as you can see No.887 was still only one year old in 1979 and I came to rather like them as they made a distinctive 'whine'.
Posted by christopher at 08:48