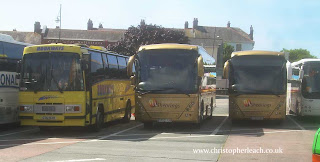 Here at Plymouth Bretonside had I waited a few hours the sun would have moved around but of course this WA related line-up might have dispersed. It's not as distinctive but I much prefer the Shearings classy gold WA livery to the brash blue and so it's sad that they are now doing away with WA branding. Apart from First's K615 LAE, a Northern Counties bodied Olympian this Hookways former Wallace Arnold Leopard was the only Leyland I saw in Plymouth last week. An interesting vehicle as PSU 938 dates from 1977 as WUG 128S and these special narrow Plaxton coaches for the Devon lanes were rebodied. Pending withdrawl JMT on Jersey wanted them but they were still too big for the Island and sadly they could not get approval. Still it was good to see one at one of it's regular WA haunts with local SW operator Hookways.
Posted by christopher at 00:59