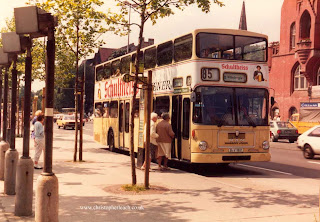 As is often the case I tend to take buses for granted till they start to vanish and then they no longer seem so mundane as one has to seek them out for that final ride delicious ride that stirs all those taken for granted memories. Once almost every West Berlin bus seemed to be one of these rather dull Wagon-Union bodied MAN SD200's built between 1975and 1985. Rather like the contemporary Ikarus single-deckers across the dividing wall in East Berlin an attractive front disguised rather a functional design. But they did have character and especially as the engines made a pleasant whine which reminded me slightly of the UK MCW Metrobus an even more favourite bus. No.1801 dates from the 1982 and was photographed in the model's heyday when still quite new and just look at the old 'Bauhaus' inspired bus stop. Like the Berlin double-decker the brewer Schultheiss is another local icon. I've been repremanded for drinking it when 'cool types' swig Becks Lager, but what the hell I can buy that at my local Sainsbury's and what would be the point of coming to Germany if  I just want 'roast beef'.
Posted by christopher at 07:50