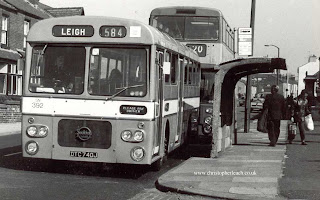 Built in Oldham the truck maker Seddon tried to make an impact on the bus market and won some notable orders particularly as the NBC took for Crosville 100 badly needed new single-deckers to speed OPO. Independent minded Lancashire United Transport didn't always follow the normal flow of things and ordered some Seddon RU's too with rather dated looking flat-fronted Plaxton dual-entrance bodies for one-person operation. This 1971 bus No 392 New in 1971DTC 740J was seen close to it's home depot at Swinton and lasted twelve-years.
Posted by christopher at 15:20