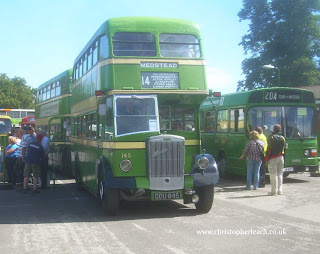 With the exception of stand-alone Midland Red who built it's own fleet,  Aldershot and District was the most unusual of the BET Group bus companies and I feel it's need for lowheight double-deckers and conservative nature suggested that somehow it had spiritually at least just narrowly escaped being part of the Nationalised BTC empire. But it was fortunate that it was not so for there would have been those ubiquitous Bristol's here wearing that rather staid 'Tilling Green1 and cream instead of these lovingly applied fresh looking country colours on it's Dennis and AEC fleet. Yes Dennis famed for it's fabulous fire-engines had it's factory at Guildford here in Surrey and naturally, A&D was by far it's best and most loyal PSV customer. A few Dennis Lancets went to East Kent and the rather expensive Loline based on the Bristol Lodekka found favour elsewhere too but a  typical A&D rarity was this this uncommon Dennis Lance k3 with East Lancs bodywork seen at the Alton Bus Rally where the company once had a smallish garage. Indeed it was worth going all that way for this event as I had never seen any of these before and it's a shame the queues were so long for rides as I might have 'hopped' on GOU 845 from this 1948-50 batch 124-147, however Lolines which I had only ridden on a couple of times before were quite plentiful helped pass the time .
Posted by christopher at 08:24