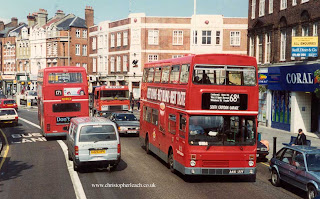 In the early Eighties to help dictate it's future purchasing policy London Buses tried nine new double-deckers from three manufacturers. The three V-class Volvo Ailsas and Leyland Oympians L1-3 were new types for the Capital but the three Metrobuses were already a tried and tested bus hence the high fleet numbers carried M1441-3. However they were the later Mk2 type with a slightly lower specification and different looking front with a long narrow grill. 260 Olympians arrived but the trials didn't make a lot of difference as Britain's largest bus company was soon to be deregulated and split up into nice bite-size chunks ready to be sold off. M1441 now part of 'South London' crawls towards Camberwell whilst one of those Olympians that was ordered L212 head towards Elephant & Castle and Central London.
Posted by christopher at 07:12