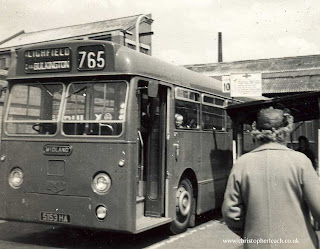 Even though except during the War Midland Red never had a garage at Coventry it was a busy and important hub with buses mainly coming in from places like Birmingham, Leicester, Leamington Nuneaton and Rugby. Some of these were quite long routes too and it took numbing two and a half hours to reach Lichfield on the half-hourly 765 which also called at Tamworth and Nuneaton where 5153 was based. It was one of thirteen of these Weymann bodied Leyland Leopard LS18 buses of 1962-3 based there and the arrival of one of these fine beasts with a good heater was a welcome sight compared to the crude single rear wheel lightweight BMMO S14's type that preceded them on this route from that garage. The order should have been split 50-50 but of the 5145-5244 only up to 5169 actually materialised as a Weymann with the bulk coming from Willowbrook of Loughborough.
N.B. Sorry about the poor quality it is a basic schoolboy camera photo.
Posted by christopher at 03:38