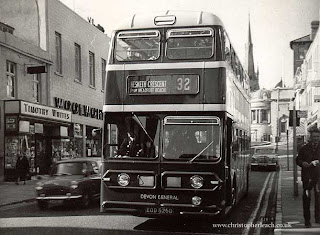 The very early Leyland Atlanteans bodied by the MCW Group and lookalikes by the others have a reputation for being rather uninspired. But as the sixties unfolded matters improved and other bodybuilders did some attractive designs. One of my favourites was by Willowbrook of Loughborough who supplied Devon General with six new buses in 1966. Not only were these buses better looking than the earlier MCW and Roe Atlanteans in the fleet they came equiped with more powerful Leyland 0680 engines needed on steep hilly routes around Torquay.
Posted by christopher at 02:17