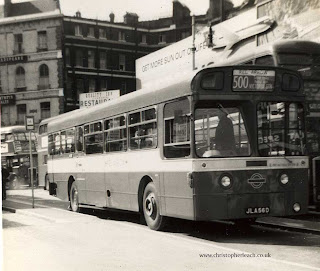 In the mid-Sixties London Transport tried new bus types including the AEC Swift or named for LT at first the Merlin. Sadly these less dependable stablemates would push out the ultra-reliable RTL based on the Leyland PD2 also to be seen here at Victoria. The first fourteen surprisingly had Stratchens bodywork and introduced both 'opo' and the continental concept of standee city buses to London operating short distance Red Arrow routes.
Posted by christopher at 03:18