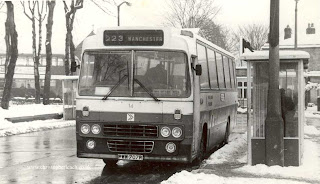 Alexander T-Type bodies were not very common outside Scotland but as well as somewhat surprisingly Eastern Counties having a few more could be found in Yorkshire and along with Traction, West Riding-YWD had eleven too. This view was taken at Birstall perhaps and the lightly loaded Leopard would encounter deeper snows than this over the Pennines.
Posted by christopher at 02:19