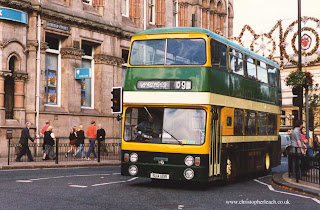 The later generations of rear-engined Leyland Atlantean and Daimler Fleetline were very much the same shape but frontal styling made for variety. One of the most attractive with a less square feel was built by Charles Roe in Leeds for the local West Yorkshire PTE and it looked rather nice in Warstone's Green Bus Company livery which was by the Nineties looking a bit too colourful. SUA 121R was seen in Wolverhampton at the time when the fleet and it's operations were growing.
Posted by christopher at 01:42