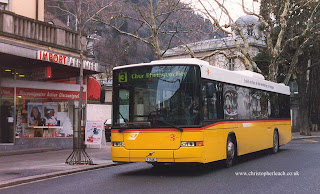 Unlike the old PTT the Deregulated Die Post was able to pursue a much less standardised vehicle policy based more on cost as not only did it now have to stand on it's own two feet it had to compete for much of the business. Fortunately it was able to start competing on other operators much more profitable urban routes too like this bus in 2000 P25683, one of a new breed of Hess bodied Volvos to arrive in the PTT Regie fleet and seen in Chur.
Posted by christopher at 12:46