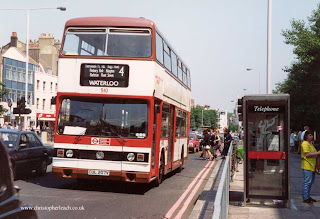 With the break up of London Buses came a number of operators to take over the route contracts. At best some were just as good but most fell well short of the mark. I'm not sure how London Suburban fared but when it came to people-skills the driver of the bus I took from Islington on the 4 would be at the bottom. Because of congestion at the bus stop he had to double park which meant some elderly passengers didn't realise he was there till he was about to pull out. When he had to pull up again for them the abuse and swearing from the driver to them was simply shocking and what's worse they seemed to just take it for granted. However it was not the driver of this bus former London Buses T207 CUV207V numbered a very ambitois No.510!
Posted by christopher at 09:14