The Return of Preston Bus 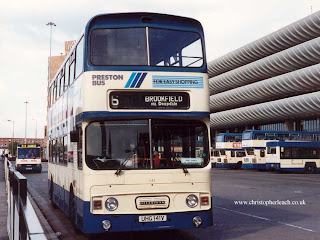 There are so few former municipal operators left in Britain giving visitors that local touch that for once it's nice to report one that has been saved. Already struggling Preston Bus eventually fell to the might of Stagecoach who promptly started painting the fleet into it's universal colour scheme. But an appeal to the Monopoly and Mergers Commission resulted in Stagecoach having to sell it off to a new owner as the sale was not in the public interest. The small but growing Birmingham based Rotela group listed on AIM took over the company most of the buses and the depot at Deepdale Road. We now wait to see whether they retain the Preston name or give it a different branding. Like many other Lancashire operators and being right on the doorstep it was hardly surprising that Preston was a Leyland stronghold and later AN68 Atlanteans like this 1980 Alexander bodied example UHG 141V gave long and reliable service in the town.
Posted by christopher at 10:24