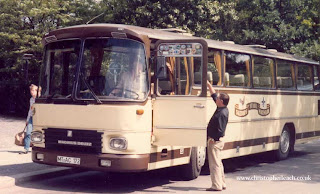 I don't know if it was just me but I had rather a soft spot for these slightly old fashioned Magirus-Deutz coaches as they had a rather more rugged character than the refined slinky offerings in Germany from Mercedes and Neoplan. The traditional operator's name on a ribbon complete with the local emblems shows the pride from a different era and no doubt attracted me to the coach. It looks like this this one taken outside the Zoo in the Berlin in 1982 was from Salzberg.
Posted by christopher at 09:25