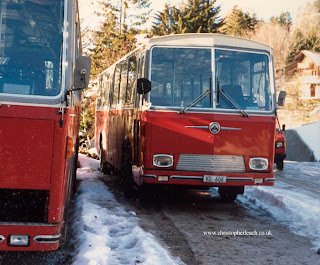 I can't remember if the local transport operator BVB were still running a tram between Chesieres and Villars when I arrived there for schooling there in 1963. However even though the operator made the former Post Garage it's main operating and maintenance depot the old BVB tram yard was still there and being used as a storage area in 1989. By this time the Swiss underfloor engined Saurer DUK introduced in the early Sixties was getting a lot more more scarce but it looked as though at least VD 608 still had a bit more useful work left in it yet.
Posted by christopher at 03:30