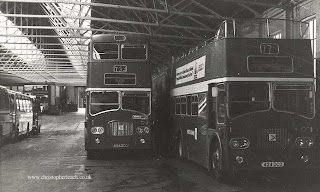 Most of the bigger BET and BTC operators had large garages and some of them like City of Oxford had one huge one to serve the city whilst all the others were fairly small. Southdown was one of the biggest BET companies which at one time could boast  a thousand vehicles but even in it's home town it could not offer the enthusiast anything as big as say the the 160 garage and works in Ribble's home town of Preston. This was because it had twenty-four garages often not too distant from one another plus various smaller dormy sheds. Freshfield Road in Brighton might well have been one of the biggest but that is just a guess, as Eastbourne, Worthing and Hilsea Lines had a decent allocation I suspect. However despite the row of mainly wintering convertible Titan Queen Mary's this was the Brighton's coach garage whilst a somewhat smaller Edward Street housed the local bus fleet. Indeed there was also another one which seemed to be for mostly storage on Moulscombe Way as all I saw in there were three out of use Burlingham bodied Commer Avengers.
Posted by christopher at 14:40