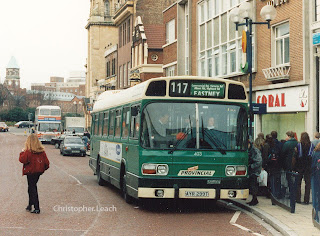 When people asked why someone was interested in buses there were any number of companies they could point to including the 'Walsall of the Independent's, Gosdport and Fareham. Sadly by the time I took this the fleet was very much of the unremarkable Leyland National but at least in the early Nineties People's Provincial retained that distinctive colour long before Arriva tried something similar but with less success.
Posted by christopher at 01:22